Members of Bayview Yacht Club and other Great Lakes clubs have been racing from Port Huron to Mackinac Island since 1925. The Bayview Mackinac Race is an institution in the region, ranking as a pilgrimage for racing sailors, many of whom are proud members of the Old Goats Society, a distinction reserved for sailors who have completed the race 25 times or more.

At first the racecourse was almost always a straight shot, 235 statute miles up the eastern Michigan shoreline, but in the ‘70s, a 290-mile, two-legged course was introduced, sending the fleet across the lake to the Canadian shore before turning northwest towards Mackinac Island. There were variations on the two themes over the years, but in the early ‘90s, Bayview decided to use both courses, with the smaller, slower boats generally assigned to the Shore Course.

The race has used many different rating rules to handicap its fleets, ranging from the Universal Rule, NAYRU, and CCA, to the IOR, IMS, IRC, and PHRF. In 2016, the Bayview Yacht Club Mackinac Race Authority selected the ORR rule for use by the larger boats on the Cove Island Course and, in 2017, chose ORR-Ez for the Shore Course. ORR requires boat and sail measurements by an independent measurer, with certificates issued by US Sailing, while ORR-Ez uses owner-supplied data and therefore costs less to obtain a certificate. 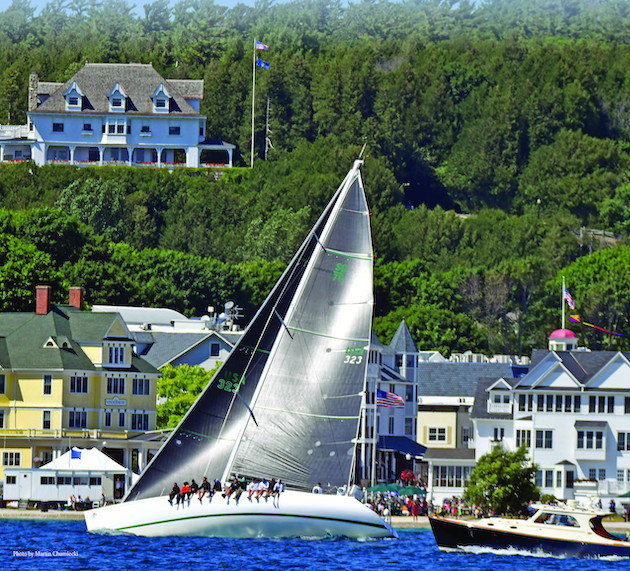 The chairman of the 2020 Bayview Mackinac Race, Chris Clark, says, “We use ORR for the Cove Island Course, which has the higher-performance boats sailed by people who are more likely to work to increase the performance of their boats. We believe ORR fits that model very well. For example, there was always optimization occurring  between some of the Santa Cruz 70s—all with different rigs, keels and rudders—and ORR provided stability for that game.

“We use ORR-Ez on the shorter course,” Clark says, “and we put a ‘speed bump’ in, so if your boat rates slower, you sail the short course and if it’s faster, you sail the Cove Island course.”

Clark says for the Shore Course, the organizers are generally trying to attract those who want to do the race in boats like Catalina 30s, S2s, or Nonsuch 30s. These owners aren’t likely to spend lots of time and money optimizing and reconfiguring their boats.

For a period of years, the race had been handicapped using IRC and then PHRF ratings, and these simpler rules had their supporters. On the whole, however, there was way too much dissatisfaction and debate about ratings. In 2015, ORR Technical Director Jim Teeters made two presentations to the organizers, which led to the selection of ORR for use on the Cove Island course, and then a third presentation in early 2017, after which ORR-Ez was chosen for the Shore Course.

According to a 2019 post on the race website, ORR was instituted “across the fleet to deliver more competitive racing based on standardized data for hull dimensions, sail inventory and size, as well as how much crew a boat will carry. We feel it has accomplished its goal.”

Clark says, “We have a good PHRF committee that works hard but since it is local there may be a perceived  personal or political aspect. With ORR, this allows the Bayview Mackinac Race to be hands-off. We have a race to run and are not in the rating business. “

Teeters, ORR Executive Director John Horton, and US Sailing’s Nathan Titcomb have continued to support the MRA each year, helping with the process of skipper applications and obtaining of ORR certificates in a timely fashion; Clark expresses his appreciation in particular for Titcomb’s extra-hours efforts to generate certificates.

There will always be handicapping challenges with a fleet as diverse as Bayview’s Mac, such as this year’s effort to introduce a Sport Boat class on the Shore Course; but the focus for organizers and competitors is now primarily on the racing, not the ratings.

The large question mark when we spoke with Clark in early May this year, of course, was whether the early July race would be able to start as planned with the risks of the COVID-19 pandemic. Clark said the race had been run every year since it started, even during World War II, and his organizing group would continue working hard to prepare to run a race if permitted by state and local authorities, including the starting venue in Port Huron and the destination on Mackinac Island.  He expected the fleet would be smaller than the normal 200-plus boats, but as of May 7th, 133 applications to race had been received.

ORR - America's Choice, part 1 of a series Members of Bayview Yacht Club and other Great Lakes clubs...
All ORR News